Guest Review of Acquainted with the Night by Piper Maitland

Today we have a special guest reviewer named Laurielu. She runs Bona Fide Reflections and was awesome enough to help this Hussy out. 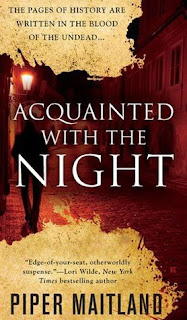 Acquainted With the Night by Piper Maitland is a story where Indian Jones meets Da Vinci Code with paranormal mythos peppered into the mix to create an original story that will keep you guessing. The book offers a lot of excitement, emotion and adventure.

Caroline (Caro) Clifford goes from tour mundane London tour guide to a person who is sought after by many people throughout many countries. There is a massive manhunt out there searching for her. Some of them are good guys; but, most of them are not. Fate has partnered Caro with Jude Barrett, a handsome, quirky former biochemist who studied mice in his experiments in which he was able to mimic vampirism. He is on his own quest to find out more regarding the mysteries he may have unlocked. And a long the way, he ends up with a lot more than he has bargained for.

Caro has her world turned upside down when she learns her Uncle/guardian has been brutally murdered while he was on an archeological dig in Bulgaria. His death leaves Caro’s world in a literal tailspin as she travels all over the globe to unearth hidden papers and truths many would like to leave well hidden. Along the way she finds out that the night has a lot more to offer than the normal things that go “bump” in the night.

Caro also discovers some truths about her self that will make her question the foundational certainty of who she always thought she was. As the mystery unravels and her journey gets more treacherous, she makes many discoveries that would make any normal person want to surrender, turn around, and go back home; but, Caro and Jude get to a point of no return and must see this adventure to the end.

This is a good story with many exciting twists and turns to keep the reader guessing and very entertained. There is an element to the novel that I found frustrating. In my opinion, the author was trying to juggle a lot of plots and then have them all culminate together at the end to give the reader a pulse-pounding ending; but, Ms. Maitland misses the mark a little bit by “putting too many irons in the fire.” I feel that the story was a little disjointed in spots, especially in the beginning of the book. But, given that, Acquainted With the Night by Piper Maitland is a good paranormal story that offers a lot of high adventure and romance. I am looking forward to more Caro and Jude adventures in the coming book which Piper is surely writing. Happy Reading!!

**thank you to the publishers and NetGalley for the ARC provided in exchange for an honest review.)