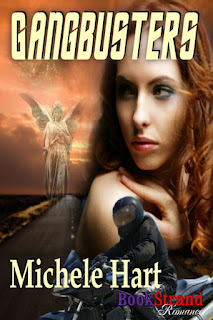 Gangbusters – Book 3 of I-Marshal Stories
In the end, it’s either you or the demon that comes for you.

Daniel Tierney and his fellow I-Marshals take down the organizations producing the most dangerous substance in the Alliance. But reporter Faith Vedder turns up at the worst times, including Danny’s near-assassination. He’s had enough of her interference and requires her source of information.

Faith won’t tell him anything that compromises her Pulitzer-worthy story, not even under the magic of hot attraction. She doesn’t know she’s surrounded by fallen angels at war. Danny’s not finished making demands. She doesn’t understand until a giant, snorting, winged monster slobbers down her back, threatening to flay her.

The gangbusters can’t delay in their mission to shut down gangs until Danny learns the new criminal kingpin of their world is a man who once held Faith’s heart. In the guise of a gangland executioner named Heretic, Danny will destroy him. Even if it destroys Faith.

Angels are watching. Demons are plotting. Faith is the key.

***
Don’t stop. Read more.
Investigate steamy, peril-packed excerpts, read a tense first chapter here:
http://www.MicheleHart.com/b28-book.htm
Buy Link: http://www.BookStrand.com/gangbusters
Go ahead. The angels of madness are calling.
Hi, Kelly and DemonLover’s Books! I’m pleased to be here. I haven’t “stood in the room” with so many demon lovers (this year) so I am protecting my soul with sacred amulets and incantations. Just in case a demon leaps out at me. I love to be scared, don’t you? I prefer rescue by a handsome angel, but a saucy demon makes sexy entertainment until the good guy shows up. ***Wink!***

Where do you currently live?

Are you Married? Kids? Pets?

Michele: Single, kid-free, and petless. I roll light for adventure. I hope to get a pet soon, though. Life without a pet is not as rich as life with one, IMO. She will be a sassy Yorkie with a black bow in her perky tresses, and her name will be Alien-Killer Hart. Killer, for short. “Go for the throat, Killer!” Already got her mantra down-pat. And I will take her everywhere wearing a spiked collar.

What/who/how did you get started writing?

Michele: It started some twenty years ago in a debate with a handsome, blue-eyed devil named Torch. I’d fictionalized my argument into a tragic romance. An obsessive English major and launcher of a WMD smile, Torch told me, “Hey, you’re a pretty good writer.” I was miffed that he hadn’t caught my point. A 3rd party said the same thing, so I started writing. I have Torch to thank. He’s one of those people who is so creative, he brings that out in those around him. I wish someone with that marvelous trait in everyone’s lives, or, even better, to be one.

How many books did you attempt before you were published?

Michele: My eighteenth book was published first, then my fifteenth. At that point, I had thirteen completed books. Three books remain in limbo, and two failed. Failure is a part of success, so I don’t let the failures bother me. Not every story works out, especially at first.

Do you have any MUST-haves to write? Food, drink, or time?

Michele: Time, isolation, coffee. They are my friends. Chocolate and ice cream often play roles. I’ll forget food and drink. Stopping to cook and eat a full meal annoys me when I’m writing.

Which novel is your favorite of your books?

Michele: I have favorites of the titles I’ve yet to publish, but of the current available titles, I love best the newest I-Marshal Story, Gangbusters. Studying for it taught me more than any other story for which I’ve prepared. And it taught me a lot about subjects of which I never dreamed I’d study, or, even find a book. Gangs, international trafficking, really hot and exciting technology. Thanks to Amazon, one can find a book on anything.

Who is your favorite character?

Michele:  Hands-down, it’s the hero of Gangbusters, Danny. He’s a dark, somewhat disturbed anti-hero, at first. He’s a killer, and one might be put off by that…until one sees who he assassinates and for what those people are responsible.

How many books do you have in the works?

Michele: I’m now working on an I-Marshal free read. Then, it’s time to bring out some of those finished projects from my vault of stories. I’m halfway through an alien-abduction story. I have another completed shape-shifter trilogy ready to hit the re-edit pipeline. I’m planning another I-Marshal trilogy with a dark twist, a superhero short story, and another short story about a woman with a very strange and specific paranormal talent. And I’m going to collaborate with two other authors on a trilogy based on a famous alien story.  🙂 I’m trying not to think up a new story. I’m always wishing for six more hours in every day.

For your next book, what is the name and when is the release date?

Michele: The I-Marshal free read is coming up next. It’s called Telekinetic Romeo, and it’s based on a great character in Gangbusters. I’d planned on killing the guy, but he turned out to be a fantastic character, and he begs for his own adventure. Look for that around March.

What inspired you write this book?

Michele: Gangbusters, as is all the I-Marshal Stories, is inspired by my study of historical and modern gangs, and speculation of future crime in space.

Do you need to read the I-Marshal Stories in order?

Michele: No. I’ll endorse reading them in reverse. Start with Gangbusters, then Vigilant, then Luminous Nights. Telekinetic Romeo will be pure fun after that.

What is the 1st book you remember reading and falling in love with?

Michele: It was Greek myth, and I’d cleaned out my elementary school library. I’d had a couple of early propellants into the study of the Greeks and Egyptians. I’d been born and raised on Egypt Lake, and my brother’s and sister’s last name is that of a great Greek king, so I’d been drawn to it. And I’ve never stopped studying ancient myth.

What is your favorite quote?

Michele:  I have dozens of quotes on my office walls, but this paraphrase of Edmund Burke moves me the most. “Evil triumphs when good men look away.” It keeps me on a path of vigilance. Another fave: “Evil is done in darkness, good deeds in sunshine.” I love the polarization of good and evil, along with the eery realization that they often exist together. Shiver.

Michele: Black, like my coffee, comedy, and stories. Very hard to find anything in my purse and closet when everything is black.

Tell us something no one knows.

Michele: No one knows my bedroom is filled with roses, ballerinas, and dragons.  I love the beauty, grace, and strength. Now everyone knows.  🙂
Thank you, Kelly and DemonLover’s Books, for lending me your audience!
Spend your winter with a hot hero and a risky adventure. I wish you all a safe and memorable holiday season. Whew! Have you checked out the DemonLover’s Man Candy? Almost stopped my heart. 🙂
Here’s my shameless promo: Shadow, risk, and mystery.
Can I interest you in a sssexy and dangerous shape-shifter escaped from a prison-planet for your winter hideaway? How about a brawler with a badge who can read your thoughts? Imagine yourself trapped on a space station with your high-school crush and only hours to live. Find me when you’re ready for a risky mind-control adventure battling the CIA. Feel like fighting the Mob today? Does your heart secretly desire to be frightened by demons, rescued by angels? A gangland hit man named Heretic awaits you… Discover passion, dare, and adventure under all-new moons and stars. Investigate me. http://www.ILoveShape-Shifters.com/

Pick up my Greek myth free read, No Funny Stuff!, while you’re there. Here’s a free coupon code for it – DJ74B. That’s just for you demon lovers out there. But don’t do it, if you don’t want a laugh. Start here: http://www.MicheleHart.com/b22-book.htm