I’d like to introduce fellow author, and my friend, . 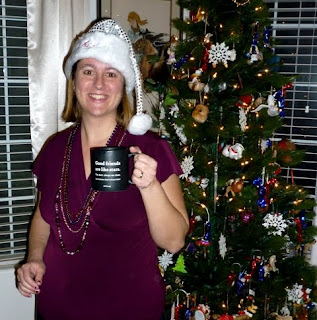 Thank you, Laurie, for having me here today.

My recent release, Her Devoted Vampire, just came on out Feb. 22 from Evernight Publishing and it’s a dream come true for me. I’ve been writing stories since I was a kid and learned to read. I had this teacher who said we could “publish” a story we’d written and he’d bind it for us.

I’d have a real book! 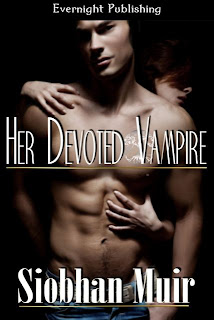 This, of course, electrified me into the idea that I could become a writer, someone who wrote down fantastic stories and sold them to people in bookstores. That was just about the best idea ever.

Then life intervened. The stories, mostly dreadfully written fantasies, sat for a long time after high school, gathering dust (I wrote them long-hand in blank books). Then I got a computer (for college) and stories managed to get into digital format. At least now they were easy to revise. 😛

But it wasn’t until I’d finished grad school and had a baby that I turned my full attention back to writing – and discovered I had twelve sci-fi/fantasy stories, and two romances in various states of completion. My husband and I agreed I could have a non-traditional job that would allow me to be a mother to my children and I decided I wanted to be an author (not just a writer, and there is a difference).

I thought it would be easy – I mean, I had all these stories. A little editing, a little tweaking, and it should be a piece of cake. Yeah, right. Do you know what ‘backstory’ is? It’s an insidious creature filling your carefully woven tale with useless details and stuff that happened at some time other than the story you’re telling right now. It’s usually accompanied by great herds of ‘was’ and ‘were’, and clouds of ‘that’ and ‘which’. I had no idea all those things had infiltrated my writing, but I learned pretty quick when I sent one such untried story to a literary agent, and she took seven months to tell me she couldn’t get past the first page.
Talk about disappointing.

So when I told a friend I’d written a short Vampire romance story, and she demanded to read it, I warned her it probably wasn’t very good (it was the first romance I’d ever written and I hadn’t self-edited yet). She waved away the warning and took it. Two days later she told me I’d better give my vampire tale to the critique group in preparation for publication or she’d string me up. I thought she’d gone crazy, but I gave the disaster to the group.

Sure enough, too much backstory, extraneous details, overuse of ‘was’ and ‘were’, and I hadn’t even started the darn thing in the right place. But along with the critiques came comments like “wow, I really liked your story” and “that was a great story”. So I made their suggestions, cleaned it, fixed it, edited it, and then gave it to a line editor for one more sweep.

Finally, it was ready, and I’d chewed my nails down to nothing as I submitted it to Evernight Publishing, praying I’d fixed it enough. LOL

You’ll have to tell me what YOU think. The title changed to Her Devoted Vampire, and was released Feb. 22 this year. Oh, and that other manuscript with too much backstory that the agent didn’t bother to read? Yeah, that one was picked up by Siren Publishing and should be released in May on ebook, and in September on Print on Demand. 🙂

If you’re interested in picking up a digital copy of Her Devoted Vampire you can find one at the following places: