I’m not really a comic reader.  I like the concept and I research story arcs, variants, etc. on all the different major series but in general I don’t read them. However, I want to try and read more because I’m always talking about them at work or meeting people who work on them.  Plus I like all the superheroes and enjoy seeing my favorite series get translated.  So, this is my attempt to make a more concerted foray into the ‘magazine’ type comic.
Grimm Fairy Tales is an ongoing series and as you come to expect it centers around female heroines who wear things that, in real life, would never stay covering their boobs no matter how much tape they used.  But that’s expected so let’s move past it shall we?

I find the concept of this one really interesting.  I mean we all know Robin Hood as the noble man who stole from the rich to help the poor, but Robyn Hood is anything but noble.  She’s been a thief her whole life and after a very tragic accident/attack she wants only one thing.  Absolute revenge.  However, she’s somehow sent to another world and told this is her real home and she’s needed here to…you guessed it…stop an evil king who is taxing and killing his people.

So after I got past the “Ok, so she’s not from this world and came here in jeans and a hoodie so how did she suddenly acquire a barely there corset and leggings?”
…ok I just have to say she goes from this: 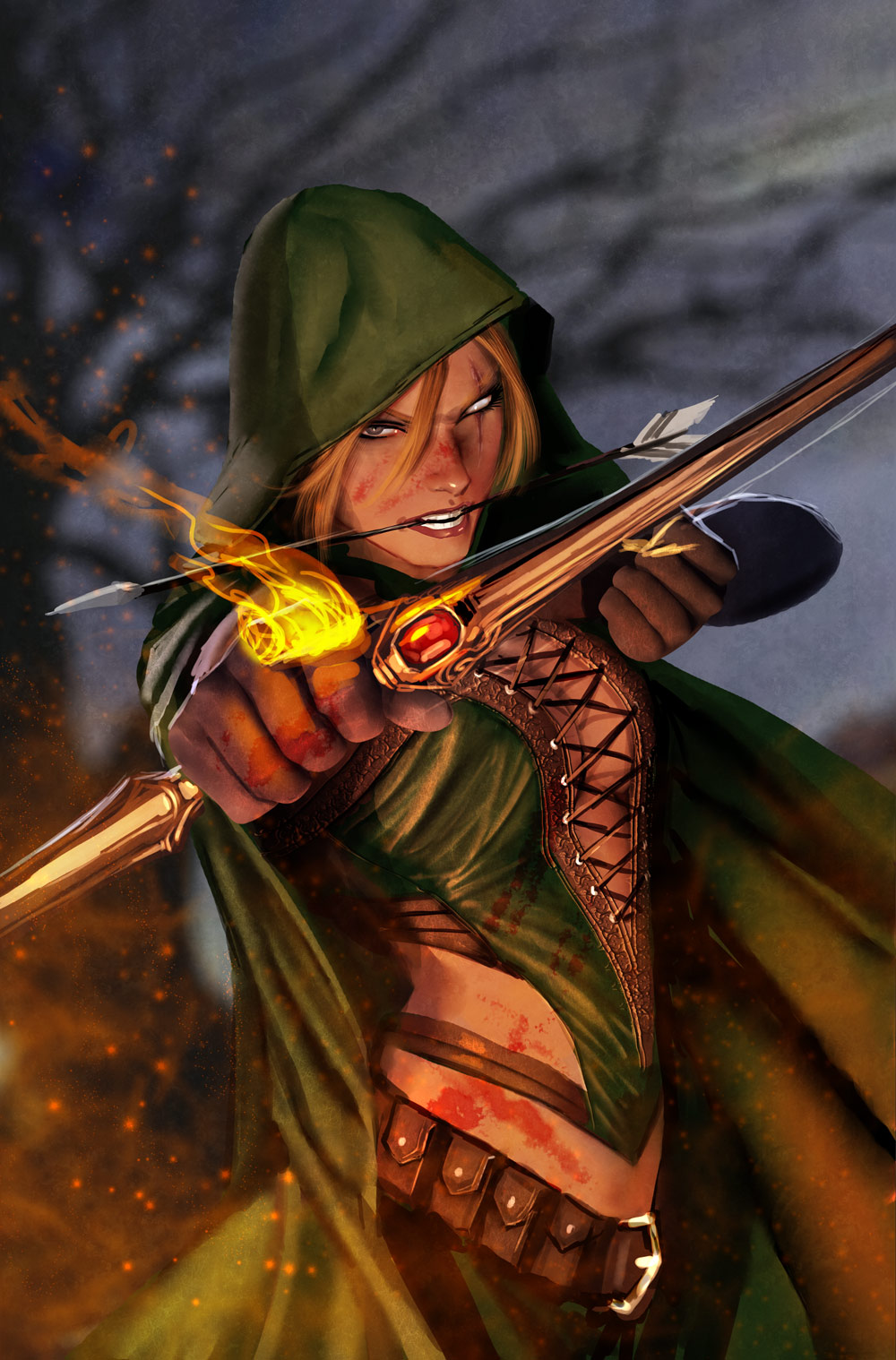 Seriously?  I know they’re gearing toward a male audience but oh brother…..

and past the trouble I generally have with comics, which is that they are meant for people with short attention spans, I liked it.

For one, I like that no matter what good and noble thing Robyn does, she only does it so she can return to our world and get the revenge she seeks.  Oh, and she gets it!  This chick is not a sweet little lady, but a violent female hellbent on destruction.  And she’s not bad with a bow and arrow, which is kind of amazing since she’s got one eye.  Although there is some “magic” that weaves its way in to help with that.

Is it violent?  Oh yeah, so if you’re one of those people who objects to violence by and against women – don’t read this.  But you get the back story on why Robyn’s this way, and you see she’s got heart as well.  She’s just learned to bury it really well.

I think I would’ve liked it a lot more if A) She kept the jeans and hoodie in the other universe because I can’t take her seriously in the bustier get-up.  B) We didn’t skip time in such a way that made me feel like, for the span that passed, she should’ve been a little more “part of their world” C) She comes back to her world too quickly.

But, it doesn’t put me off reading more comics and I’m kind of interested to see where her story goes from here.

P.S. Don’t get me started on some of the ridiculous variant covers.  Ugh.

eGalley provided by Zenescope via NetGalley