A cup of sugar…a dash of cream….and a craving for a cake decorator that won’t be denied…

When Captain Judah Shield learns he is more bastard than noble born, he goes in search of his true lineage. Determined not to lean on his family’s wealth, he accepts a job managing Redcake’s Tea Shop. Despite the flurry of excitement a single soldier creates among the staff, Judah clearly has no time for a wife. Though what man doesn’t have time for a delectable beauty like lovely Magdalene Cross?...

He has the bearing of an English gentleman and the fiery touch of a true rake. Which is precisely why Magdalene must avoid Judah if she hopes to escape her family’s reputation for scandal. Surely no good can come from a man whose kiss leaves her hungry for more. Certainly not the kind of marriage that could restore her social status. Still, Magdalene cannot help imagining what an incredible wedding night it would be—and when fate steps in, she may not have to imagine after all…

One lucky commenter will win an ecopy of One Taste of Scandal, just leave a comment!

This is the second book  in the Redcakes series, and it’s a got a neat storyline. This series centers on Redcakes, a cakery and tearoom. In the first book we saw Hatbrook and Alys marry and take over Redcake’s from her father. In this book, we see Hatbrook’s brother, after learning that his father was not his real father, try to find himself.

Judah has come back from India after his mother died (which I did not see coming since I thought the gallbladder surgery had helped her). He is lost and rejecting his courtesy title of “Lord Judah” and prefers to be called Captain Shield. Hatbrook and Alys ask him to help manage the bakery while they are gone, and he accepts. So making his own way and on the road to finding himself, he finds a lovely young lady named Magdalene.

Magdalene Cross, of the Scandalous Crosses, is in a tight spot. She’s nursing her sister-in-law who is at death’s door, and helping out with her nephews and brother. She’s still young enough to land a husband, but she never has the opportunity. Then she meets Judah.

He can help her find out about her brother who is still in India (in the last book he and Judah were both reported dead, but neither man is). They behind a mild flirtation, but both know nothing can come from it. Until he offers her a postition at Redcake’s decorating cakes.

She accepts, but one thing I really liked was that she was embarrassed to be a worker. She could lose her station and her reputation if she gets caught. So many times in books, the heroine never address that issue. I liked Magdalene. She was a great heroine.

Judah and Magdalene have a slow romance, and there are some bumps along the way, but it’s a satisfying end to the story. I actually want to hear about Alys’ cousin, the one who makes and fixes all the machines. He’s an interesting character who I wouldn’t mind reading about.

If you’re looking for a Victorian romance that isn’t the usual balls and dukes, try the Redcakes and you won’t be disappointed. 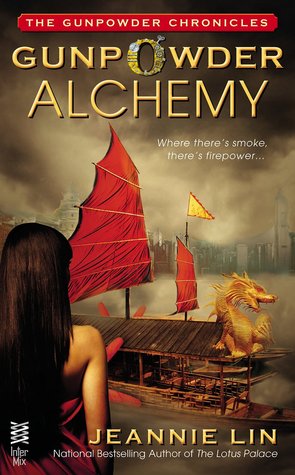