Giveaway of Incarnation by Emma Cornwall

Gallery Books is offering a US only Giveaway of this Steampunk Incarnation. Just enter by leaving a comment with your email address. Contest will run for 1 week. 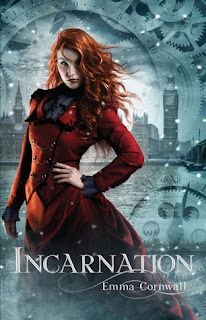 I must admit I was mainly drawn to this one by the cover. I wasn’t sure what to expect though, since it looks YA. It isn’t, not at all. I’d classify this one as a Steampunk UF. The beginning catches you up immediately, but it sort of slows down. I found the writing and the world captivating.
This is about the side character Lucy from the Bram Stoker novel Dracula. In this story, Mr. Stoker is used by the British government, among others, to hide Lucy’s death. But, surprisingly, she’s not dead. When she claws her way from the grave, her memory is sketchy, and she ranges from feral vampire to confused lady. Once the bigger part of her memory comes back to her, she finds the Stoker novel  in her father’s study and instantly seeks out the author. She wants to know why she was turned and who turned her into the monster she has become.
Lucy’s dual nature tends to be at the forefront of this story, although the nature of the plot is much deeper than just Lucy. Her vampire half is at war with her human half, and rather than just giving in to one side, she has to find a way for both parts of her to coexists. Her leftover humanity is what makes her so unique. Unique enough to attract attention from everyone.
All of the attention brings several matters to Lucy. She is very important in this new world, and she could bring about the destruction of her kind.
I don’t want to spoil the mystery, because that is the driving factor of this plot-the mystery of who sired Lucy, why isn’t he around, and what has happened to him?
There is a teeny bit of romance in this book, and once you find out more in depth about it, it’s really bittersweet. The only thing I wasn’t a huge fan of was the Steampunk was very light throughout the story. This story deals more with the government, the repercussions of machines replacing men and Big Brother watching all the time rather than showing gadgets and fun clockwork pieces. In fact I don’t think the vampires ever use a piece of machinery except for a steam coach at one point. If this becomes a series, I truly hope the Steampunk becomes just as predominant as the civil unrest.
Lucy’s battle to keep her humanity parallels the political aspect in this Steampunk very well. Big brother is watching, even in her world. Compelling and intriguing, this Steampunk will catch your attention right off the bat.
***ARC courtesy of Gallery Books