Giveaway and Interview with Anita Clenney 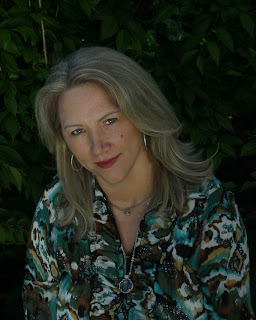 I got the chance to ask USA Today and NY Times best seller Anita Clenney a few questions, and she’s awesome enough to giveaway a copy US and Canada only, of her new book Embrace the Highland Warrior. Just leave a comment answering her question, and your email to be entered.

HH: What started you writing? Was there a moment where you just decided to write? Or has it always been a dream?
AC:I’ve always loved reading. After a long reading jaunt, it was like a light bulb went off in my head. “You can write a book,” the light bulb said. I decided the only way to find out was to try. I was shocked at how much I didn’t know, but I’m glad I went in ignorant, otherwise, I would have been too intimidated to try.

HH: Do you have a day job? If so, what?
AC: No, I’ve had several jobs from Real Estate to booking shows for Aztec Dancers to working in a pickle factory, but for the past several years, I’ve stayed home with the kids, and for the past five I’ve also been writing.

HH: My favorite question: Why Highlanders?

AC:I needed really strong warriors under Michael the Archangel’s command, so what better than highlanders. There are warriors all over the world, but this series deals with the Scottish branch.

HH: Also, why time travel?
AC:I didn’t set out to write paranormal or time travel, in fact I didn’t think of this as time travel until just before it sold, because he’s not traveling through time, he’s just sleeping for a long time in a box that stops time, but I suppose that’s time travel. ?

HH: How did you pick your time and setting?
AC:I don’t write historical, so I didn’t want to have the hero too ancient. I figured 150 years of sleeping in a time vault was long enough. The second book, Embrace the Highland Warrior, which comes out today, has a hero and heroine BOTH from modern times. Along with the battle for good and evil, this is a story of poignant love, shocking revelations, and making peace with the past.

HH: How much do you research before you write?
AC: It depends. A lot of this stuff is in my head. I have a very active imagination, and with paranormal, you have a lot more flexibility, but when I need research, I do everything online. And I do a lot of brainstorming on the story before I write.

HH: If you could go back in time, when, where, and is there anyone specific you’d like to meet?
AC: I would love to meet my ancestors. I think that would be so cool.

**My publisher, Sourcebooks Casablanca, will give away a copy of Embrace the Highland Warrior to one commenter, US and Canada only please. My question is do you like paranormal stories, and if so, how dark?**

Anita Clenney grew up an avid reader, devouring Nancy Drew and Hardy Boys books before moving on to mysteries and romance. After working as a secretary, a Realtor, teacher’s assistant, booking agent for Aztec Fire Dancers, and a brief stint in a pickle factory (picture Lucy and Ethel–lasted half a day)…she realized she’d missed the fork in the road that led to her destiny. Now she spends her days writing mysteries and paranormal romantic suspense about Secret Warriors, Ancient Evil and Destined Love. Anita lives in suburban Virginia, outside Washington DC, with her husband and two kids.

You can find out more about Anita and her books at:

Some of the places Embrace can be purchased: 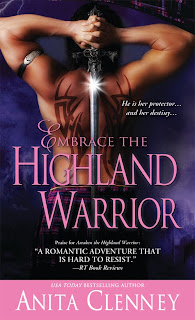 We’ll leave you with an excerpt from Embrace:

Cody sighed. Might as well get it over with. He removed the shackles, returned them, and bent over her. “Shay, wake up.”
Her eyes flew open. She planted both hands against his chest and shoved, knocking him on his back, then sprang on top of him. “How dare you handcuff me to a bed?” she yelled, punctuating each word with a shake that rattled his brain. He didn’t fight back. She had to get it out of her system, and he didn’t blame her. He’d be more than pissed if someone shackled him.
She landed a fist into his stomach, and the breath rushed out of him. Okay, enough was enough. He captured her hands and rolled, trapping her under him.
“Get off me, you oaf.”
“I’ll get off when you stop beating the snot out of me.”
She let out a war cry and lunged for his throat, teeth bared. Intrigued, he hesitated a second too long, and she sank her teeth into his neck. A jolt of desire shot straight to his groin. He’d never been one for the rough stuff, but damn! He pulled back before she could do more than leave a bruise. He trapped her legs with his and held her hands above her head, letting his full weight press her into the soft mattress. She still struggled but could move only enough to get him excited.
“I’m sorry, Shay. I had to do it. It was too dangerous to let you go traipsing through the woods. I had to keep you safe.”
“What if he was hiding in one of the other bedrooms and sneaked in here while I was handcuffed to the bed? You left me so I couldn’t even protect myself.”
“Lach heard him out in the woods, but that’s why I locked the door, just in case. If this guy had broken it down to get to you, you would’ve screamed, and I would’ve come running. I was never far from the house.” He’d heard every name she called him.
Her eyes still flashed fire, but her breath was steadier, and she kept glancing at his mouth. He thought that was a good thing. He wondered if she’d calmed enough not to hit him, because he should move. She had to notice the effect all the wiggling around was having on him. He felt her hips push against his, and he groaned. He relaxed his grip and lowered his head, letting his lips touch her chin. He kissed his way to her mouth, and she head butted him in the nose.
While the stars exploded in his head, she shoved him aside and bolted out the door. He jumped up and went after her as she pounded down the stairs. He caught up with her outside. She was swinging her purse like a whip, headed for the car.
“Where are you going?” he demanded.
“Get away from me.”
“You can’t leave.”
“Watch me.” She opened the door. “I’m tired of people hiding things from me. I thought you were going to stop. Now you’re handcuffing me to the bed.”
“I explained it to you.”
“Don’t touch me,” she said, jerking away when he grabbed her arm.
“You’re not leaving.”
Shay straightened her shoulders. “You can’t stop me.”
He grabbed her, tossed her over his shoulder, kicked the car door shut, and stomped up the steps.
“Put me down!” Shay kicked and twisted, cursing at him. He dumped her on her feet inside the door.
She blew her hair out of her face, and as soon as she could see, she threw a punch at his chin. He deflected it and grabbed her arm. “Stop hitting me.”
“How dare you throw me over your shoulder like some kind of caveman,” she spat, trying to wrench her arm free. It didn’t work, so she used her knee.
“Ah, not there.” Cody trapped her knee. “I made the mistake of letting you leave here nine years ago without listening to me. By God, I won’t do it again. You’ll listen if I have to sit on you,” he growled.
She drew back her other arm, and before she could throw the punch, he had her on the floor and was sitting astride her, pinning her wrists to the floor. She bucked and twisted, but he held her down. “We can do this all night if you want, but you’re going to listen to me this time.”
“Listen to more lies? You’re still hiding things from me. Like the fact that you have Nina’s entire house under surveillance. Like the fact that you’ve got a Bat Cave in your basement. Like the fact that you were in Scotland when the stalking started.”
“You think I’m your stalker?” he yelled. “Me! I’m trying to keep you alive. We’re all trying to keep you alive. That’s what the clan’s been doing your whole damned life, trying to keep you alive! And just like always, you’re making it hard as hell. Your father wasn’t a bloody spy, and that thing in your living room wasn’t a man!”

SEAL of My Dreams Anthology by Cindy Gerard