Forbidden by Fate by Kristin Miller 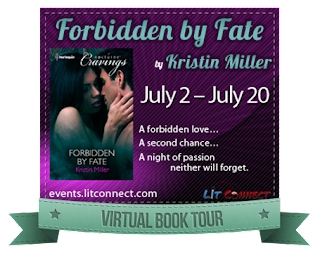 We’re the next stop on Kristen Miller’s Virtual Blog Tour! Stop by tomorrow to enter her contest for your own copy of Forbidden by Fate.

This was a fun and sexy world full of dragon and wolf shifters. Sasha’s a wolf, Damon’s a dragon. Seven years ago they fell in love until Sasha’s father found out. He made Sasha tell Damon they could never see each other again. It was a star-crossed lovers plus getting over a betrayal plot (which I love).

I enjoyed the world. I think the world-building and plot were well-done and easy to follow. I think that the hero had some fantastic lines, oh boy did he make me swoon at the end, and I liked how the heroine was finally willing to stand up to her father.

I couldn’t get past the way the hero and heroine were. It’s hard for me to explain. I feel like they behaved really young for their age and for who they were in the book. The heroine is the alpha’s daughter in the wolf pack, and is being groomed to take over the pack as the first female alpha ever. Yet every time she is in a scene (which is most of the time), she acts like a bratty teenager who pouts and sulks.

The hero has been ostracized from his people because of his relationship with Sasha, so he’s had a rough life living on his own. But Damon’s queen has offered him a chance to rejoin their people and gain her favor once more-all he has to do is go to the wolves, negotiate this neutral parcel of land into draco territory and ignore Sasha. This will prove his loyalty and that he doesn’t want Sasha anymore.

I was expecting a harsh demanding alpha male, and I got another kid. He’s flippant and teasing (don’t get me wrong, I did actually like him), but he wasn’t what I was expecting from a badass dragon shifter. I think he had some fantastic lines towards the end, and he was one of those guys who had no problem making the heroine see how much he loved her in actions and words. He was able to admit his need and desire and it was nice to see a hero who could do that.

I think that while the ending was a tiny bit predictable (in a good way-sometimes it’s nice knowing the bad guys will fall, and the lovers will triumph), I did enjoy myself and I will read anything else in this world, because I’m really intrigued with the Draco queen.

***Thank you to Harlequin for the review copy