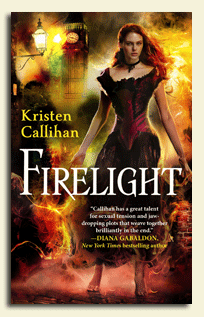 This is a debut novel by Kristen Callihan and bravo to her! I’ve been becoming more obsessed with Steampunk these days, but I still love a good Paranormal Romance and this one delivered.

Benjamin Archer is a man cursed and seeking an artifact that will save him. An artifact that Miranda’s father stole from Archer and may have lost at sea. Archer wants revenge, but on his way to kill Ellis he meets Miranda and can’t make this vibrant young woman an orphan so he leaves London only to return 3 years later a much, much, much richer man and determined to claim the woman who occupied his dreams ever since he met her.

Miranda dreams of leaving her current life one day but never imagines it will be because the Dread Lord Archer has decided he wants her hand in marriage. To her delight she discovers that beneath the mask he constantly wears (rumor is he is horribly disfigured) lies a warm, intelligent, witty and deeply sensual man. To her irritation she discovers that he never takes off his mask and is determined not to consummate their marriage no matter how much they both may want to.

Soon she learns that there are dark forces surrounding her husband. Rumors of rituals, secret societies, and old enemies that are now trying to frame Archer for a series of murders. To her horror Archer does nothing to try and disprove his guilt and to his horror Miranda is just as determined to find the person responsible and prove his innocence.

When she discovers that it’s not a deformity he’s hiding, but proof of his dying humanity in the achingly beautiful marble like texture his skin is taking on, she knows that it will take much more than some simple artifact to save his soul and that “thing” may be the very gift she possess. And she may very well have to kill them both in order to do so.

Callihan takes the time to really set up characters that are believable, plot, atmosphere, the list goes on. But the tension she builds up between these two was so hot I was skipping pages to see if they finally did anything more than tease each other. You know it’s good when I skip ahead because I’m one of those annoying people who has to read every single word, which means I have to read the good stuff twice since I have to go back and read what I missed 😛