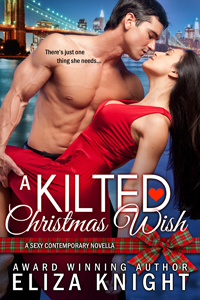 I live on the east coast and we have had a lot of snow lately! Kids have already been out of school a couple days, and I haven’t seen grass in weeks! As soon as those first flakes start falling, I immediately fall into what I like to call my snow day coma.

I don’t get work done at all. In fact, I’m fairly useless except for doing the things I like to do on snow days!

What do you enjoy doing on snow days?

In my latest release, A KILTED CHRISTMAS WISH, Darla and Aaron get to do a lot of fun snow day activities (and not just the naughty ones!). I’m sharing with you all an exclusive excerpt!

Down on her luck with men, Darla Strider wonders if she’ll ever meet her own kilted hero. Considering she lives in present day New York City, the likelihood of that happening is nil. She’s certain only a Christmas wish could make her dreams come true. Until the day Aaron Sutherland walks into her café, and changes her whole world.

Leaving his pain in Scotland for life in the States, the last thing Aaron has in mind is hooking up with a city girl. But one look at Darla and she’s got him singing All I Want for Christmas is You.

“Here we are.” Aaron paid the driver and climbed out, reaching out his hand to help her.

Darla slipped her hand in his, shocked at the spark that tingled up her arm. If just touching his hand was this electrifying what would kissing him, or… Stop! This is just a date. Nothing more, nothing less. If she kept it up at this rate she’d be climbing into his bed tonight and planning their wedding tomorrow. And then he’d leave her with a broken heart by the weekend.

Fifth Avenue was a jostle of activity. A myriad of New Yorkers from all walks of life rushing to and fro. The skating rink was filled with people, laughing and calling out with glee. Holly Jolly Christmas played over the speaker system. The Center had a huge two-story high Christmas tree, decked out with giant gold and red globe ornaments and colored lights. It was mesmerizing.

Aaron pulled a pair of red woven gloves from his pocket. “Might seem presumptuous of me, but…”

“You brought me gloves?”

He nodded, looking a little sheepish.

“Pretty confident aren’t you?” She winked.

He gave her a boyish grin that had her melting. “Pretty hopeful.”

Darla held out her hands and wiggled her fingers. “Well, I accept your gloves with much appreciation.”

Aaron grinned and slipped the soft cotton onto her fingers and then over her palms. “A perfect fit.”

“I’d hoped.” He pulled on his own pair of black gloves and then offered his hand. She slipped hers into his grip, feeling the strength in his larger hand. A strength that both comforted her and sent ripples of need through her.

“To be embarrassed?” she joked.

“I was going to say to have fun, but if we’re going there, I’m slightly prepared for the embarrassment factor.”

Darla’s head fell back as she laughed. Was it completely unfair that the man seemed to be cut from her dreams? Aaron led them through the Channel Gardens and then down the stairs toward the rink.

“Mr. Sutherland,” an attendant called, waving them over toward the VIP Access entrance.

“I thought you’d never been here before?” Darla said.

“Not until this morning.” He winked.

She tried not to be too impressed with how much trouble he’d gone to, how awesome it felt to be swept off her feet. But how could she not be? Aaron had pulled all the stops to show her a good time on the ice. They picked out and changed into skates, teasing each other as they both stood, wobbling, for a good thirty seconds or more before falling wasn’t an imminent issue.

“My lady,” he said with a low bow, balancing himself on his skates. “Would you do me the honors of skating with me?”

Darla laughed, slapping a gloved hand over her mouth and wobbling at the sudden movement. Her heart pounded a staccato beat, and she concentrated on keeping her hands from trembling. “Yes. I would love to.”

Aaron flashed her that killer smile, and once again her heart was leaping into her throat. He held out her hand, and she took it, allowing him to lead her out onto the ice. They were both a bit shaky on their feet, gliding over the ice, hand in hand. Crisp, cool air whipped against her cheeks and in her hair. She couldn’t help the excited smile plastered to her face. The scraping sound of blades on ice, laughter and music made it a magical moment she’d burn into her memory forever.

Whirling in front of her, Aaron skated backward, both his hands clasping hers as he led her around ring.

“You’ve skated before,” she said, a little surprised at his skill. “But inside you were wobbling!”

He shrugged, a shy smile on his lips. “Once or twice on a frozen loch. It’s been awhile. You?”

“Not enough.” She swayed, shifting her feet. “And never on a frozen loch. Sounds magical.”

“You’re doing a great job,” he said, glancing around before turning back to her. “Most beautiful skater here.”

She raised a brow. “You are a charming one.”

Aaron tugged her closer to him, so like a dream. His scent was intoxicating and she was so close to just giving up all her inhibitions and pressing her lips to his.

“I prefer honest.” He flashed a devilish grin and she nearly lost her balance.

“Thank you,” she ducked her head, feeling the heat of a blush flame her cheeks.

He pulled her even closer, just barely flush against him, making her worry the points of their skates would tangle. Wrapping an arm around the small of her back, his heat seeping into her, he leaned down and whispered, “You’re welcome,” in her ear.

Just two simple words, but they still sent a shiver of delight careening over her senses. She lost her footing, clutching at his chest. Aaron chuckled, and steadied her on her feet.

Thank you Eliza for blogging at Got Fiction today!  Readers, be sure to comment at tell Eliza what you like to do on snow days!