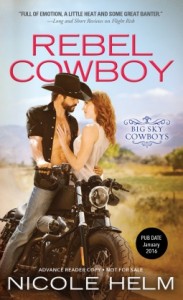 First in a new series about a struggling Montana ranch, a woman determined to save her family, and the NHL-star-turned-cowboy who makes it all possible.

Mel Shaw is determined to keep her family ranch from going under, so she takes on a job helping some city slicker get his old ranch up and running. And if that means being in tight quarters with the hot NHL-star-turned-cowboy? Well, she did say she'd do anything for family.

After leaving his NHL career behind, Dan never expected to find a home on his rundown Montana ranch, but with Mel guiding the way, he finds that and so much more…

I wanted to like this book so much. But by 30% in I still didn’t like either the hero or the heroine. I think that at 30% is right where we see a change in their relationship, but I didn’t like them enough to want to continue.

The hero is a hockey player who screwed up big time. He choked in the playoffs. Twice. Once is crappy, but fine whatever,  bad luck. Twice looks suspicious. Rumors abound that he’s thrown the games. He’s gone out west to his grandparents’ farm to find himself and wait on his agent to tell him when he can go back to hockey.

The heroine is driven and determined. She wants to bring her ranch back to where it used to be before her father was in a devastating car accident, and her brother hadn’t tarnished their name.

She’s hired to help the hero  learn how to ranch. It’s a big chunk of money to teach a spoiled big shot how to do manual labor, she’s not happy but she needs the cash.

This is where I started to hate the hero. He is constantly showing how willfully ignorant he is. The son of a famous hockey player, he lived and breathed hockey. He used hockey as his escape. But he ignored all other aspects of life, so now that he has to actually deal with his own failings, his own problems, and his own emotions, he realizes how bad it really is. He can’t throw money at it to fix the problems. His own agent isn’t really on his side. He never thinks that he may never play professional hockey again.

I don’t know if he ever went back, or if his name was cleared or not. I didn’t like him.

Now, some readers really love an emotionally stunted hero who has to learn how to deal. Normally I would too! But he was much more spoiled brat, than hero. I didn’t see much change in him by 35% in, so I’m over it.

The heroine was mean to him from the get-go. Like boom. Snap judgement, before she met him. Another trope I normally like is enemies to lovers, but there has to be a real reason to hate him. He wasn’t bad to her. He had his moments where he was an ass, but he didn’t deserve so much of her anger.  She hated him for reasons that really didn’t have much to do with him as a person, just the fact that he had an easy life and was taking her away from what she wanted to be doing.

I liked this author’s style of writing, I just think this hero/heroine combo didn’t work for me.