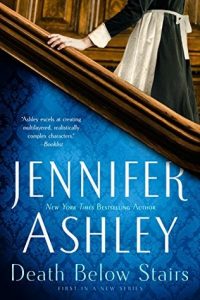 Victorian class lines are crossed when cook Kat Holloway is drawn into a murder that reaches all the way to the throne.

Highly sought-after young cook Kat Holloway takes a position in a Mayfair mansion and soon finds herself immersed in the odd household of Lord Rankin. Kat is unbothered by the family’s eccentricities as long as they stay away from her kitchen, but trouble finds its way below stairs when her young Irish assistant is murdered.

Intent on discovering who killed the helpless kitchen maid, Kat turns to the ever-capable Daniel McAdam, who is certainly much more than the charming delivery man he pretends to be. Along with the assistance of Lord Rankin’s unconventional sister-in-law and a mathematical genius, Kat and Daniel discover that the household murder was the barest tip of a plot rife with danger and treason—one that’s a threat to Queen Victoria herself.

This book picks up after A Soupcon of Poison ends by a couple of months, and Kat is starting a new post in a new home. Kat Holloway is a cook, one of the best in England, and for some reason, tragedy follows her. Her assistant in the new home is murdered.

Kat does the only thing she can think of. She sends for Daniel.

Daniel is, well, we don’t quite know what Daniel is yet. My money is on some form of spy or PI. It’s the 1880s after all, and I think a PI would be an interesting hero. Daniel is a master of blending in, yet he also seems to be a peer. She can’t quite pinpoint him. But he can help, and she knows it.

Daniel is there in a flash, and he is as mysterious as ever. But it’s coincidence that he’s looking into the man who owns the house she works in…or is it?

I enjoy the tone of this series. Kat is no Urban Fantasy heroine who kicks butt and has powers.
She’s a cook. She’s normal. And she’s able to figure out angles that the authorities maybe haven’t thought of. In short, I love her.

Kat is still reeling over the murder, but she knows that there won’t be any justice for the girl if she doesn’t push for it. She and Daniel make a great team, and together they figure out that this is much more than a servant girl being murdered, but that the killer leads all the way up to a possible attack on the queen!

I finished this book and immediately wanted more. This series has more to come, don’t you worry, but it’s not here yet, so I’ve discovered Jennifer Ashley’s Captain Lacey series written under the name Ashley Gardner. It’s a similar vibe, except it’s set during the Regency and Captain Lacey is a man. But if you’re looking for a good Historical Mystery series, the first book is free right now.

Jennifer Ashley has such a way with words, and I love reading the lush and descriptive world she’s created.