To save her sanity may cost him his mind…

Kidnapped and experimented on by R.E.X. labs, Amanda’s memories are foggy. She can’t recognize friend from foe and she strikes out with everything she has. Only one man penetrates the storms surging in her mind, a soothing stranger with hypnotic eyes…

Cautious, methodical Simon has always been careful to keep his innermost self, contained. Simon must confront his fears—and his deepest secrets—to help the powerful mutant rein in her abilities in.

With new enemies closing in and dark revelations unfolding, the Boomers face their greatest challenge yet and the deeper into her psyche Simon pushes, the more her madness threatens them all…

Winning never felt so much like losing. The team has recovered Corkscrew, but she is lost to insanity. Simon, the most cautious of them all, must risk everything to bring her back from the brink, but losing this gambit could cost them Simon as well.

Find out more at: Amazon | ARe

Read an excerpt from DEADLY GENESIS:

The laboratory downstairs contained the latest equipment, and they’d expanded it for Ilsa’s research. The Hamptons mansion doubled as their medical facility since Ilsa joined their quest for answers. Her relationship with Garrett Fox and the peace she brought him aside, she was an invaluable member. Her knowledge of neuroscience and the workings of their bio-mechanical chips continued to provide them with data crucial to the completion of their mission.

The stairs shuddered under his feet, and Simon swung himself over the railing to land on the floor. The lab was in worse condition than the upstairs. The clean room remained thankfully intact. But blood sizzled in a toxic swirl on the table, the remnants of Ilsa’s research into Garrett’s abilities and her desire to help him control it—that room would definitely need to be sanitized.

Located on the far side of the laboratory, the door to Corkscrew’s room hung open, half melted and destroyed. A flash of light shot across and he barely had time to tuck and roll before pain crackled across his shoulders. He saw her, standing in the center of the room, her eyes open wide and wild. Agony twisted her features and her thoughts swirled like a hurricane, lashing against his shields.

Another blast shook the house. She wasn’t quite focusing the force of her abilities—thankfully. If she had, she would already have shattered a hole through to the sub-basement. Gritting his teeth, Simon tried to get a read past the entangled thoughts thrashing in her mind, but what humanity he could sense there remained deeply hidden. Instinct drove her, not reason. The pauses between her attacks lengthened and he waited for the next burst of fierce energy. Thirty seconds passed and a bolt shot across the room, turning a chair to slag.

Surging upwards, he launched himself right into the line of fire.

She jerked and whirled to face him.

He stripped off his gloves and seized her bare arms. Heat raged across her skin like a too hot cup of coffee, not quite scalding the flesh on his palms.

Power thrummed through her, but only sparks fell from the tips of her fingers. He tugged her close and jerked her chin up. He didn’t need physical contact usually or line of sight, but the blackness flooding through her damaged mind choked him.

Amanda Kincaid. He punched her name through the tempest and drilled down to the glowing core he could see beneath the shadows. You’re safe. You must stop.

She struck him, kicking at his shins. While not as physically powerful as the other Boomers, her ineffectual blows couldn’t move Simon. He shunted past another electrical surge in her mind and darted through the tentacles of madness until he could cup his mental fingers around the spark of humanity.

Power built up in her, a cataclysmic surge of energy, and it wouldn’t be long till she reached overload. The research he did into her abilities suggested nuclear fission on a bio-chemical level—radioactive and dangerous.

Amanda Kincaid. He repeated her name, infusing the demand with a layer of request. Hear me. You are safe, but endangering others. You’re building to critical overload. You must stop.

The words barely penetrated the buffeting winds cycloning through her mind. The heat against his hands became almost unbearable. Three more times he tried.

“I’m sorry.” He couldn’t risk another burst of her power. Closing his mental fingers around the spark, he cut off her autonomic functions. Her lungs didn’t work, her heart stopped, and she sagged like a broken doll whose strings had been cut. The moment unconsciousness took her, he released his grip and told her heart and lungs to function again. Cradling her close, he checked her pulse and blew out a sigh.

But if they couldn’t get her under control soon—he snuffed out the direction where that thought led.

Follow the blitz for your chance to enter the giveaway!  One winner will get: one $10 Amazon Gift Card and one $10 Starbucks Gift Card

The Alchemy of Ink

For the Love of Bookends

Mom with a Reading Problem

Other Books in the Boomers Series:

Rory knows she’s being watched, and she’s not about to let the hunter catch her in his trap.  She’ll confront her stalker, a man she suspects is involved in the disappearances of other superheroes – if she can ignore the sensual heat that fills her every time he’s near…

One of five desperate men sent back in time to save the future, Michael believes eliminating Rory is the key to his mission.  But even as he takes aim, a split second of doubt causes him to miss his shot.

Drawn together by passion, and on a collision course with fate, can Rory and Michael work together to change the future?  Or have they set in motion the horrific history the time-travelers are trying to prevent?

Prequel is available at Amazon | Barnes & Noble | Kobo | iTunes | ARe

On the cutting edge of neuroscience, Ilsa is developing microchips that can be inserted into the brain and deliver information. The applications are endless, but her current goal is just to get dogs to return to their owners should they ‘become lost.’ When her college roommate turns up asking for lunch, she’s hardly prepared for the chaos that ensues or the revelation her chip changed the world and the lives of five heroes from the future. And now they need her help…

Abilities: toxins, poisons and assassination, he can kill with a touch

One of five desperate men sent back in time to save the future, Garrett volunteers to be the doctor’s guinea pig as she studies their neuro-chips. It’s not his first time being a lab rat. In close quarters, the unthinkable happens, an attraction that could kill Ilsa. Drawn together by science, and on the fast track to destiny, Ilsa must prove to Garrett he isn’t toxic to everything and save his team from their chips before they can end them…

Heroes come in all shapes and sizes. An alliance with Halo has given their leader a taste of hope. For these five lonely soldiers, the single emotion may prove their most dangerous threat. 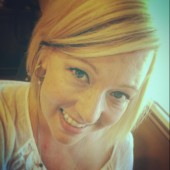 Excerpt: Caressed by the Edge of Darkness by Amanda J. Greene