HIS NAME IS DANTE.

Dark. Talented. Beautiful. Star of the rock band Inferno. Rumored owner of the hot New Orleans nightspot Club Hell. Born of the Blood, then broken by an evil beyond imagination.

HIS PAST IS A MYSTERY.

F.B.I. Special Agent Heather Wallace has been tracking a sadistic serial murderer known as the Cross Country Killer, and the trail has led her to New Orleans, Club Hell, and Dante. But the dangerously attractive musician not only resists her investigation, he claims to be “nightkind”: in other words, a vampire. Digging into his past for answers reveals little. A juvenile record a mile long. No social security number. No known birth date. In and out of foster homes for most of his life before being taken in by a man named Lucien DeNoir, who appears to guard mysteries of his own.


HIS FUTURE IS CHAOS.
What Heather does know about Dante is that something links him to the killer — and she’s pretty sure that link makes him the CCK’s next target. Heather must unravel the truth about this sensual, complicated, vulnerable young man — who, she begins to believe, may indeed be a vampire — in order to finally bring a killer to justice. But Dante’s past holds a shocking, dangerous secret, and once it is revealed not even Heather will be able to protect him from his destiny….

Special Thanks to Adrian Phoenix for the copy of her book A RUSH OF WINGS, first book in the Maker’s Song Series.
This series is a MUST read and I reccommend getting the entire collection: 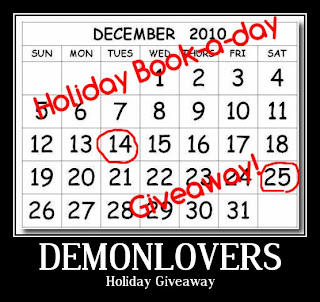 You know the drill by now!
but just in case…

Winner will receive all 12 books presented during this event

Enter a comment for each day in the contest
Be a follower & subcriber to DemonLover’s books and more
Go check out my other blog: http://betterwithexperience.blogspot.com/
and become a follower

His Destiny by Diana Cosby

Wages of Sin by Jenna Maclaine

Forget my Favorite day of the week? No way! It’s Theo Thursday…