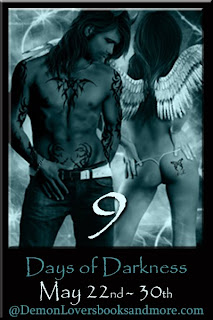 Day 4 in 9 DAYS OF DARKNESS EVENT w/Alexis Morgan
She will be joining us today
10-4pm PST
A little about Alexis Morgan…
Vampires and Vikings—oh, my!
I currently write three paranormal series, each set in a different reality. Keeping up with three worlds and the people who live in them definitely keeps me hopping, but I love it. I thought today I’d share with you how I developed two of them—my Talions and my vampires.

The Talions came first. I was reading a book on ancient women warriors and came across a description of the excavation of a gravesite. They were talking about everything they could surmise about the woman, using the artifacts she was buried with as clues. It occurred to me as I read the details, that no matter how hard the archeologists try, they’ll never really KNOW the important facts woman buried there. How did she laugh? What color were her eyes? And more importantly, who loved her?
I had to wonder how the man who buried her with such care would feel about her grave being disturbed and her belongings put on display for the world to see. What would he do if he found out? Of course, in order for him to be watching, he’d still have to be alive. Okay, by now my imagination was running at full speed.

I could just see that thousand year old Viking, his heart breaking all over again. To make his story believable, I had to come up with a reason he’d still be alive. As it turns out, in my world, the Vikings developed the ability to harvest life energy from ordinary people, most often with no damage to the humans involved. My Viking, though, was the enforcer for his people, destroying those who would harm others. The dark energy he’d absorbed over the centuries has kept him going. Ranulf Thorsen, a six-foot-five redheaded Viking, became my first Talion in DARK WARRIOR UNLEASHED, living in the Cascade Mountains just east of modern day Seattle. By the way, just so you know, he stole back his wife’s belongings. I can’t blame him for that.

My vampire world is very different from that of the Talions. Again, something triggered one of those “what if” marathons that writers are prone to. I was wondering how a major shift in the climate would affect the North American continent. I decided that if there would be fewer temperate areas, then land would be at a premium.
In the North American Coalition, three species compete for existence, each with its own strengths and weaknesses. The vampires live the longest, but can’t tolerate the sun and need the humans’ blood to survive. The humans can tolerate greater extremes in climate, but they are physically weaker. And finally, there are the chancellors—a vampire/human hybrid with strengths

I’m not sure how Alexis does it. She takes you into a fantasy world, introduces the hero and heroine and there’s no looking back. Every one of her novels can be defined as a “page turner” or a “quick read”, if only for the fact that you don’t want to set them down.
Vampire Vendetta is no different.

We are dropped into a world of Vampires, Chancellors and humans live together and thrive, showing that we are all able to get along for the most part.
Seamus Fitzhugh, however, does not want nor need to get along with any of them. He has made revenge and fury the fire that burns inside him and pushes him to complete his task. Seamus’ quest of deceit and retribution takes him to the O’Day clan compound and closer to the man that has single handedly ruined his life, his career and left him now the last of his clan.

Under the guise of being a medic in which the compound so desperately needs, he intends to infiltrate the compound and maneuver his way into the good graces of Rafferty O’Day.
Megan Perez is barely clinging to life, starved and sick beyond comprehension. She is walking day and night this last leg of her journey, no longer able to push the cart with her belongings: she clings to one priceless bundle in her arms. She must make it to the O’Day compound, to her cousin’s home and to safety, whatever the cost she must deliver the bundle safety; even if it means her life.
Okay, I’m sure what I’ve written about this story has grabbed hold and made you want to read this book.
Alexis is stopping by today from 10-4pm PST to chat with you about this novel and much more.
If you haven’t already discovered her books, Alexis has a PALADINS and TAILONS series that are out of this world, the Paladins being one of my absolute favorite series.
You can find out more about her books at her website: www.alexismorgan.com
Alexis is a wonderful author and I had the pleasure of interviewing her in person while I was in Seattle, WA this year. She was my FIRST author interview, so I feel we have a special connection…
You can read that interview by going here: ALEXIS’S INTERVIEW
Please take a look at Alexis’ books and come to chat with her, she is a great person as well as a fantastic author.

Keep a look out for the next book in the TaIlons series,
coming this August, 2010
Dark Warrior Untamed 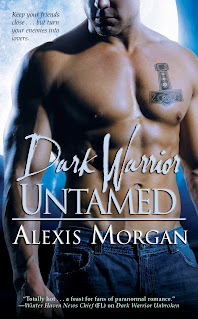 Giveaway!
If you enjoyed my review of Vampire Vendetta, then you are in luck. Alexis is giving away a signed copy of the book to a lucky winner.


SPECIAL ADDITIONAL CONTEST
To be entered into the SPECIAL mystery contest at the end of the event, Post the 9 DAYS OF DARKNESS button on your blog or somewhere and tell me where I can find it?