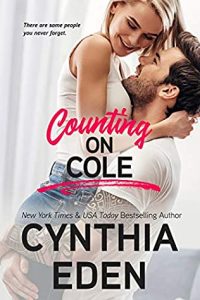 She was the one who got away. The one who ripped out his heart and took it with her when she left.

Cole Vincent never expected to see Evangeline Lake again. Back in the dark and bloody day, he’d been hired by her brother to save her in a mission that went straight to hell. Evangeline had been kidnapped and held for ransom, but he’d been sent in with a covert team to get her out. Thrown together in the dark, a stunning attraction burned through them. But she wasn’t meant to be with an ex-soldier who had a past that was littered with secrets and death. She went back to her fancy world. He went back to hunting. Tried to forget her. Case closed.

There are some people you can never forget.

Evangeline “Evie” Lake fell hard and fast for her tall, dark, and dangerous rescuer. Then he flew her back to her home, kissed her goodbye on the doorstep, and walked his sexy self away with looking back. He broke her heart into a million little pieces, and she swore off the “bad boys”—they were just trouble she didn’t want. Case closed.

She needs help. The kind that only someone like Cole can give to her.

The past is coming back to attack. Evie’s kidnapper was never caught, and when she’s nearly abducted in New York, her brother calls in the one man that he knows he can count on…the one man who has proven he can protect Evie from the worst threats out there. The one man that Evie absolutely, positively does not want to see again…

The only man she’s ever loved.

Cole takes the case. Becomes her bodyguard. Gets far too close to her and stirs memories that should have been dead and buried in a six foot hole. The white-hot attraction burns ever brighter between them, but Evie will not fall for him again. Will not. Except…

She is. He is. They are…falling.

Cole wants Evie more than anything, and this time, he won’t walk away. This time, there is nothing that can keep them apart. He’ll fight like hell for the woman he’s always loved. He finally has a second chance with Evie. He won’t screw this up. And he will not let her go again…he will prove to Evie that she can always count on him to keep her safe.

She is the only one he wants. The one who owns his heart. Anyone who wants to hurt her? They have to go through him. Case closed.

I’ve been waiting for Cole’s book for a while now. I liked him when we met him, and I like who he’s become.

Evie was kidnapped 2 years ago, and Cole at the time was a mercenary who put a team together and got her out. They fell in love, but he knew she wasn’t going to want someone like him in her life. After an unforgettable night, he delivered her back to her brother, safe and sound. But he never found the kidnappers.

Cole was brought in to Wilde in I think Ben’s book (so book #3 in this series Before Ben). He’s spend the past couple years trying to become someone better, someone Evie would be proud of. But he knows that the stains on his soul will never wash clean. When Erik Wilde offers him the case to act as Evie’s bodyguard, Erik isn’t thrilled. The last time someone requested certain agents by name, it was a set-up. So he cautiously let’s Cole know that Evie’s brother wants him. Cole knows the second he hears her name that he’s going. He knows no one else will take care of her like he will.

But 2 years is a lot of time for Evie to think about how after an incredible night, he just vanished. And that’s a lot of time for anger to build. I love how when she sees him at her door she shuts it in his face. When she realizes he isn’t going anywhere she allows him to tag along, since she knows he’d just follow anyway, besides, she’s almost kidnapped once again. She may still be mad at him, but she’s not stupid. She knows he’ll protect her. What she doesn’t know, is that he came back to get her after he ghosted her 2 years ago. He kept in contact with her brother the whole time, but Evie never knew. Her brother never told her.

One thing that I find interesting is that Cole usually had a sense of humor, but while he’s near Evie, he’s a big growly crankypants. She isn’t safe, she isn’t his (or at least he doesn’t know she is yet) , and it’s stressing him out. Hence all the growling and grumping. But he makes her cinnamon rolls, guys! He’s so adorable when she comes out for breakfast. I loved that scene, and I really really loved the paintings (no spoilers!).

I love second chances books, and this one worked well for me. I can’t wait to see what the next Wilde Ways book holds!

I Will: A Christmas Novella