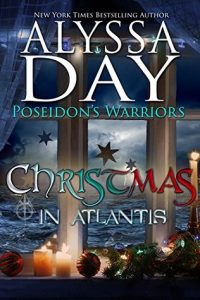 I don’t want to need you more than air, or light, or life, but I do. You own me now—body and what’s left of my blackened soul—and I’ll never let you go.
- Dare to Lyric

The Gift of the Magi…in Atlantis

Warrior-turned-pirate Dare is the black sheep of all Atlantis. He’s enraged Poseidon, the sea god, so much that he had to forfeit his ship and the water spirit who inhabits it. For Dare, being denied the ocean is worse than death. Until he meets a woman who drowns him in waves of hunger more powerful than the sea.

After the accident that killed her parents and blinded her, Lyric discovered she had a special gift—that of song sight. She now sees the world in her own unique way, and is able to discover the rarest of artifacts. One, containing a single Wish, could make all her dreams come true. Or it could deliver to Dare—the man she’s falling in love with—the thing he most desires.

It’s the season of miracles in Atlantis. A chance to make wishes come true . . .

Discover true love in the most magical of places . . . discover Christmas in Atlantis!

This is one of two novellas (the other being Halloween in Atlantis) that bridges the two series Warriors of Poseidon and Poseidon’s Warriors. This novella is billed as Gift of The Magi but in Atlantis, and it really is, but not in a sad way.

This begins with our hero Dare, a pirate and Atlantean, whose ship is being battered by an insane storm. As he goes overboard, his last thought is of Lyric.

Lyric is an artist. She’s been blind since a terrible accident took her sight, but when she paints, she gets flashes, and she paints whatever vision she sees. She’s learned that using certain gemstones helps her focus and “see” better.

Dare is the man who brings her the stones she orders. And the day they met, they both fell in love, but it would take a relationship of seeing each other once a month or so for over five years, before either realizes how in love they truly are.

Lyric can’t stop thinking about Dare all day, and as it’s getting late, and she’s giving up on him showing, he’s there. In her home, injured, and soaking wet. As she cares for his concussion, he realizes he’s lost something in the shipwreck and they have to get to Atlantis right away. Once there, we see some familiar faces, which I like, and some new faces (since this is a year in Atlantis, I’m assuming April will be April in Atlantis?). But this is where Lyric is offered one wish, anything at all, and since Dare knows she’s going to wish for her sight back, he does something sweet and touching. But Lyric surprises him, and her wish is for him.

This story is more character-driven than any of her other books, and her style has changed. I think I wrote that same phrase in my review of Halloween In Atlantis. Her Warriors of Poseidon series was darker, a true PNR, and sexy as can be. This is more of a paranormal-lite. I still enjoyed it, but I miss the sex, I miss the outside tension, I miss the bad guys. This was sweet. I don’t know if it’s because the past two stories in the new series were novellas, so she has less page time to give us a story, or if she’s truly bridging away from the old school Paranormal Romance feel. With a year of new warriors in store for us, I hope not.

This story was sweet, I enjoyed Dare and Lyric, but I also wish their book had been full-length to really explore the consequences of Dare losing his ship, and the angst of Lyric having the power to gain her sight back versus helping Dare.

What Happens Under the Mistletoe Anthology