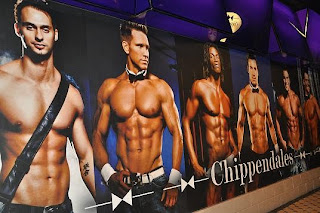 As many of my readers may know, I feature many attractive men on my personal website and draw attention to the spectacular bodies their dedication and hard work have produced. But in most cases there’s so much more than what you see on the outside.

I had the pleasure of attending the Chippendales Male Revue @ The Rio Hotel/Casino while in Las Vegas this last weekend and taking in 2 shows. Two, you ask? Well, the first was strictly fun and a planned “girl’s night out”, but the second was mostly working. After seeing the show for the first time ever, I was so impressed that I approached the Chippendales PR people about reviewing the show and interviewing one of the performers; they gave me Jace Crispin.

Above I mentioned performers, not dancers; there’s a reason for this distinction. The Chippendales show is so much more than a bunch of hot guys “taking it off”; it’s an entertaining, high octane, show stopping performance. The routines are innovative, original, well choreographed, high energy and guaranteed to leave you smiling, laughing and wanting for more. Think all you will get is a little dancing for your money? Of course you get that, but you also get to enjoy talented men singing, acting and even showing off their skills playing guitar. Having seen the “other” male revue in Las Vegas 10+ times, I truly can’t believe that Chippendales’ extravaganza of sheer male talent has eluded me for so long. A mistake I will diligently rectify by attending the show frequently in the future.

The Chippendales show has someone or something to offer each and every audience member, whether your tastes lie in firemen, B-boys, cowboys, men in uniform or out of them; the men of Chippendales WILL entertain you.

One other thing I must note is the quality of the performers and staff at the Chippendales theatre, each staff member was professional and had a single goal of making sure you simply enjoyed the show. All the dancers were very nice and even make an effort to mingle and sign autographs for the audience in the “Flirt Lounge” after the second show each night. If you are looking for an experience you will never forget, the Chippendales Male Revue is the one show you don’t want to miss.

Chipendales is the premier provider of entertainment for women and is currently the #1 Male Revue in the World. www.Chippendales.com features a free site offering a wide array of editorial and pictorial content and the Chippendales’ store, which sells branded products. For more information, please visit http://www.chippendales.com/.
Chippendales performs nightly at 8:00 p.m., with additional shows on Friday and Saturday at 10:30 p.m. Tickets are $39.95 and $49.95. For tickets, call (702) 777-7776. Locals can receive tickets for $25 nightly with a valid Nevada I.D. for any performance.

UP CLOSE with Jace Crispin 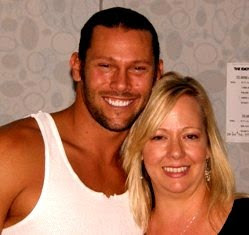 We can already see from the photosthat performer Jace Crispin is easy on the eyes, but I wanted to find out a little bit more.

Jace Crispin is 30 years old and comes to us from Orange County, Calif. Jace was a star athlete in the sport of high school water polo and even delayed plans for college to pursued a career as a professional water polo player in Europe. Two years later, plans changed due to injury and he had to give up playing the sport professionally.

Jace said he went through a rough time after the injury and found that he had somehow lost his direction. He then decided to pack up his surf board and everything into his truck and head to the Mexico. I jokingly said that he was having an “Eat, Pray Love” adventure, but he agreed that “It was something like that”, and explained that for the next two years he would surf his way along the coast of Mexico and California. Trying to find his niche and make ends meet, Jace worked as a tow truck driver by day and exotic dancer by night.

Apparently all his hard work would pay off, because while dancing one weekend he was approached by a member of the Chippendales brand and asked to attend an open audition the very next day. Jace auditioned and amazingly received a call back before he ever made it home. Nearly 5 years ago he packed up everything and moved to Vegas joining the Chippendale’s team. He told me, “I hope to put in 15 years as a Chippendales dancer, I just really love what I do”. What Jace says is sincere and it is confirmed when you watch him perform. He stands out in the show‘s numbers and puts his heart and soul into the performances. 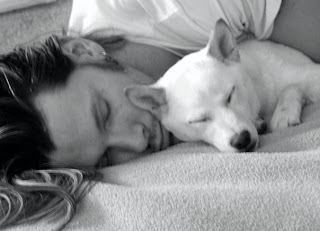 Not that you need MORE to love about Jace Crispin, but he is also a genuinely nice guy. I asked him what he like to do in his free time and he simply stated; “I spend any extra time I have with my dogs”. Jace is a dog lover and hero in the canine community. Recently Jace was mentioned in an article by the Las Vegas Review-Journal for his efforts in saving three abandoned dogs left without food or water by the previous residents of a foreclosed home. Jace found an underfed silver terrier-poodle on the street near his home and proceeded to return the dog to the address on the dog’s tag. What he found when he got there was heart breaking. The home had been vandalized and defaced by the last resident, an obvious foreclosure; the home was torn up and in disrepair. Garbage was strewn on the floors and apparently the only thing to eat for the other two dogs he’d discovered had also been left behind. Taking matters into his own hands, he enlisted the help of friends to round up the malnourished and scared animals and take them to his home for care. Through his kind efforts, all the dogs were placed with members of the Chippendales family and are now doing well, the terrier-poodle being placed as part of Jace’s own family. 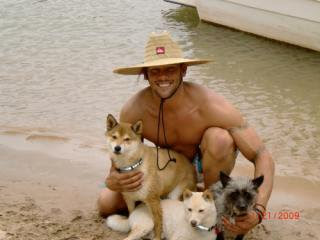 I’d like to thank Jace for the interview and putting up with all my questions, and have to address the ones that my readers will hound me for…

Yes, Jace is single. He says that he is still looking for “the one”. He is also finding time in his busy schedule of nine shows a week to go to school and finish his degree. I did ask Jace if he’s a reader, and sadly he said, “no. because I have to read aloud to really retain the information or listen to audio books, I’m more of an outdoors kind of guy”. We get it. Who has time to read when you’re saving puppies, dancing your pants off (literally) and seeking the great outdoors? No matter, I hope we as readers at least get to see him grace a book cover in the future, even if he doesn’t take a peek inside to read it.

My weekend adventure in Vegas has led me to discovery that the men of Chippendales very well may be just as spectacular on the inside, as apparently they are on the outside.

Special thanks to Michael Caprio, National Press Representative, and all of the Chippendales team.

This project is close to DemonLover’s heart