—-A Review by The Shadow Queen 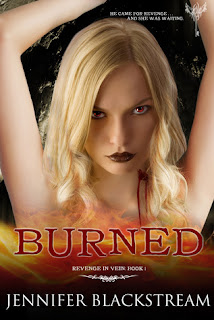 My rating: 3 out of 5 flames
Aldric has waited two hundred years to exact his revenge on Saule, the sun goddess to whom he had prayed to for mercy when his village was overtaken by the Russians. He has spent the last two decades killing any and all of those men whom attacked his village, spending the entire time planning his retribution.  He receives a letter from the Unseelie Queen informing him that she has Saule, in her mortal form, as her prisoner and inviting him into her sithen. He walks into Dubheasa’s court to find Saule bound and naked awaiting his vengeance/pleasure. He allows his revenge to overcloud his common sense and what happens when you get to close to the sun…. you get burned!
A steamy erotic paranormal, I give the book 3 out of 5 flames. I am very torn by this story, I wanted to really like it and it is very well-written. The plot is well thought out and the scenes are descriptive and steamy .  Though I did not like the ending as much as I was probably supposed to. However,  it did lead me into wanting to read the next story in the series. Curious to see what happens to the rest of the characters in this world.
—-A Review by The Shadow Queen
***Review copy courtesy of the author  and Skeleton Key Publishing