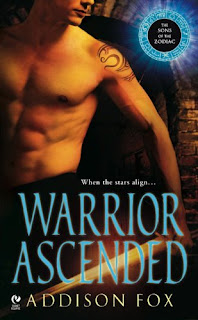 I feel that the idea of this book is amazing! Themis and Zeus made a sort of checks and balance system for humanity in the form of Zodiac Warriors. There were 144 warriors-12 for each sign-and their job was not only to protect humanity, but to battle Enyo, one of Zeus and Hera’s daughters. She was a goddess of war who caused nothing but grief on Olympus. So Themis, ever balanced and just, decreed that whenever Enyo and her warriors would battle, the loser would lose some of their strength and powers, the winner, would gain. When we meet the warriors, present day, Enyo is cheating and angry at having lost not only battles, but power.
This first time novel by Addison Fox is about a Leo warrior, Brody, who is trying to protect 5 stones that once brought together and used by the “key,” would bring about the end of the world.
I think that if someone like Sherrilyn Kenyon got a hold of this idea it would have been gold. What I didn’t like only had to do with the writing style. It felt like the author would jump around and not let us know where she was. It was a little confusing, and the heroine, Ava, was a mousy librarian type. She is an archaeologist who works in the museum, but her Leo warrior is more Indiana Jones. She supposedly is a fearful timid thing, but that never came across right. Not that she was incredibly brave, but she never really came across as timid, just mousy. Her father had been murdered for the stones when she was a child, but no one ever believed it was more than a random mugging in New York. Ava’s uncle plots with Enyo to get his greedy little mitts on the stones, and with the plot twist at the end, we all find out who really killed her father, and the why’s.
I like the characters, and I would read the next, but I won’t buy it new.
I really really love the concept of this book, and I only can hope Addison Fox’s writing improves as she continues on in the series. I wouldn’t mind reading on about her Scorpio warrior in the next book.
3 stars

My friend ParaJunkee is having a Awesome contest.

SEAL of My Dreams Anthology by Cindy Gerard