I have a shocking confession to make… I can’t get enough of M/M Erotica. There’s something about it, well let’s just say “It floats my boat!” and I have a few authors I’d like to place the blame on…

Here’s enemy #1… AJ Llewellyn.
and the review of his Hotter than HAWT book titled WANTED 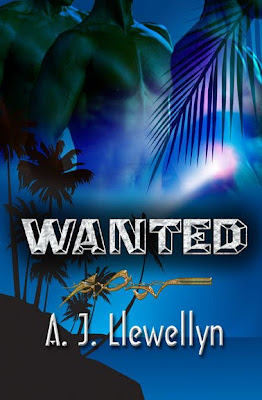 Honolulu forensic accountant Mingo McCloud’s lover has cheated on him again. To escape his heartbreak, a severely depressed Mingo moves to the North Shore of Oahu. Eager to start a new life and to forget, Mingo soon learns that Turtle Bay might be the home of big surf, but it also has even bigger secrets. He catches the eye of a mysterious stranger, Jason, a sexy lone wolf with a troubled, sketchy past. The two become embroiled in a tempestuous love affair that turns dangerous when Mingo discovers Jason is spying on him.

Involved in his first big murder case, Mingo needs all his emotional resources to help find a missing young housewife…yet his private life just turned deadly. He has no idea why Jason would be tracking his every move—or even who hired him. Determined to find the truth, he hires big black, bad French former mercenary, Francois, to help him…and discovers shocking truths…Mingo McCloud has gone from wanting to wanted.

Well, like most erotica I can’t give away ALL the good parts; but I can tell you that the story and steamy scenes in this book will leave you WANTING… I may have to put his books on auto-order!
I think the main reason I love AJ’s writing is the connection you feel with the characters. I’m not just saying that you can relate, you can feel the anguish, ache with the pain they feel and rejoice in the extasy. I don’t find the sex scenes dirty, but rather passionate and boiling over with desire.
The story will speak for itself, AJ’s writing is art and a pleasure to read. You find yourself wrapped up in this Mystery/Thriller, waiting to see what with happen next… were the clues will lead this seemingly strange group of crime fighters.
But I warn you, AJ keeps you on the edge of your seat and wanting for more This book ends with a cliffhanger, so don’t expect to find all the answers; rather running to get the next one in the series.

You can even download a free book on his site

Wages of Sin by Jenna Maclaine