Scandal in Scotland
by Karen Hawkins

Scandal in Scotland immediately follows the first book, One Night in Scotland, but I don’t think it’s imperative you read the first book. The basic premise of the series, is that Egyptologist and explorer Michael Hurst has been taken hostage until his family turns over a certain artifact. In the first book, Mary Hurst retrieved the artifact, and in this second book, we see his brother William Hurst taking on the mission of getting the artifact to Egypt.

Michael Hurst captains his own ship, so it makes sense that he take the box to Egypt. Unfortunately within the first few pages it is stolen from him…by his ex-lover! Marcail Beauchamp is a beautiful and legendary actress. She was the love of his life, until she told him she didn’t love him and that she’d found a new man to make her his mistress-a titled man who could offer her protection. Michael is constantly reminding himself that whatever emotion he sees in her is false, she’s an actress after all.

You can get a feel for the book from this small passage:

“I sense some trickery here. I know you, Marcail Beauchamp, and you cannot be trusted.”

“You don’t know me. You never did.” She spoke with such quiet dignity that he was almost taken aback.”
Now, not only is Michael furious when he realizes what exactly Marcail stole from him, but he’s irritated that he still feels something for her. Going after her is a given, but he has to find her first, and since she , she has a head start.

He catches up with Marcail rather quickly, though, and the two of them have to fight their attraction, try not to discuss the past, and find out who is behind his brother’s imprisonment. But there is so much more going on, see, Marcail stole the box because she is being blackmailed, so she needs the box as well. So what can the two of them do when they each need the same artifact?

Watching Michael realize how wrong he’d been about Marcail was great, and I’m glad he figured a lot out on his own, too. I liked watching him see how wonderful she really was. Very sweet. When he realized what she went through to not only become an actress, but what she went through all the time as an actress, his comment to her was “I should have been there.” *awww*

I enjoyed watching the side characters too. There is a woman involved who has super cool ninja skills at eluding capture, and when you find out who she is? Wow, you would never have guessed it in a million years! I can NOT wait to see more of her!

One thing that drove me nuts about this book, though, is that before every chapter we see a letter from someone in the family to another family member. It was like that in One Night in Scotland as well.

Final verdict? Really enjoyed this book, and I’m enjoying the series. I can’t wait to read the next book in the Hurst Amulet series. 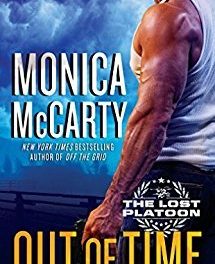 Out of Time by Monica McCarty