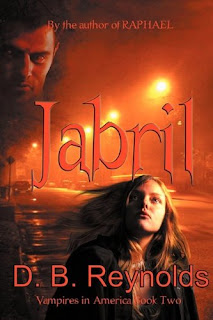 This 2nd book in the Vampires in America series gave us a little bit of everything; a thrilling story, passion, new characters, drama and betrayal. DB introduced a new vampire Lord, Jabril, who’s archaic and demeaning treatment of the fairer sex; only make you want to loathe him with all your being. He has only one reason for calling on Cynthia Leighton for her services…greed. Jabril uses the guise of wanting her assistance to locate a runaway girl, but what he really want it that which does not belong to him; that which will only ever belong to Lord Raphael, Cyn.

Cynthia finds herself stepping back in time when she walks in the home of vampire Lord, Jabril. This is a place of men, a place where he is the center of the universe and only surrounded by those of value; other men, his vampires. She easily assesses the situation, taking in the surrounding she knows that Jabril has no real intentions of having her find the missing human girl…he has brought her here to give her the once over, to see what human had held the attention of Lord Raphael. All but ready to dismiss this job, she sees someone in that great home, someone that needs saving more than the missing human girl; she’ll do the job her way and try to save them both.

Cyn and Raphael distance for one another has broken her heart, though she sees him in her dreams every night; he is still so far away. Refusing to take his calls, to see him; she can’t face the emptiness that has consumed her since he’s been away. Maybe work, this case, will help to keep him off her mind.

I thoroughly enjoyed this book. DB has a knack for grabbing you by the collar and dragging you in to a book, leaving you riveted and unable to put it down. This 2nd in the series is no exception. I was so sad when in the first book, things did not end well between Cyn and Raphael. Never fear though, they’ve got some talking to do and might just get this mess of lust, sex and tension figured out. I am breathless with anticipation to find out where DB will take us next in these amazing Vampires in America series, DB Reynolds is definitely an author to watch.

Hunk of the Day!

Get "Addicted" to THEO