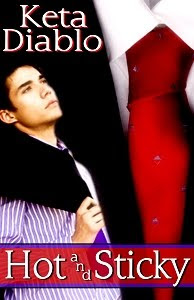 BLURB FOR HOT AND STICKY:
It’s been extremely difficult for Hugh Landon, an up-and-coming lawyer in Washington, D.C., to control his sexual fantasies about his paralegal, Milan Vassar.

When his career hangs in the balance over a missing file, Hugh must call Milan at the midnight hour and plead for assistance. Hugh’s determination not to mix business with pleasure disintegrates when Milan arrives at the office not only to help him, but to confess he’s held the same secret desires for his boss.
Review:
I really enjoyed this short prequel, and can definately say it has “wet my whistle” for the upcoming Thriller Novella.
Haven’t you ever had a crush on a co-worker? Thought that one guy was so sexy? Maybe even fantasized about your boss? Well, what might happen if the boss was thinking the same about you… enter Hugh, top notch lawyer and all business, that is until he finds a picture of his paralegal, Milan, that starts his wheels turning. In desperation to find a key piece of evidence for tomorrow’s case he stumbles across a photo and makes a call that will change everything.
Milan is out on the town and has been drinking, but still he hears and fumbles to answer his cell phone as it begins to ring. What could his boss want? Eager to help out, Milan jumps into a cab and heads to the office to save the day. He, of course, finds this key document in just a few moments; but what he finds next is something he’s never seen before. Hugh, the boss he’s worshiped and fantasized about, is looking at him… well, like he needs a little snack.
The sexual heat and passion is off the charts in the ebook and you will LOVE it. Sexy, fun and lusty, just the way I like it.
A pleasure to read and kept me wanting for more!
4 STARS

Hot and Sticky, Gay Fiction, Amber Quill Press, Buy Link: http://www.amberquill.com/AmberAllure/HotSticky.html
WOULD YOU LIKE TO WIN A COPY OF
“HOT & STICKY”

For my contest the rules are simple: