Her beginning may be our end...

Deep in the humid swamps of the Mississippi bayou, a mysterious, half-wild child is dragged just in time from the murky waters. She has no memories, no family and is covered in strange markings, the meaning of which no one is able to decipher. Adopted by the policeman who rescued her, Luce Boudrou follows him into the force, determined to prove herself in the eyes of those who are still suspicious.

However, there's more of a battle ahead than Luce could possibly imagine. She may be an orphan without a past, but no one - including Luce herself - could ever be prepared for the truth of her dark, powerful destiny...

A friend recommended this book to me and I almost didn’t read it. Boy am I glad I did. I think that when it comes to Urban Fantasy, I’m one of those who only likes it if there’s a romantic interest that goes somewhere. I don’t want 10 books of will they/won’t they, so I’m always a wee bit leery going in. This book is the best UF I’ve read in a long time.

Luce Boudrou was found in the bayou as a young girl, with no memory of her past. The cop who found her adopted her, and she grew up with the absolute best dad any girl could hope for. She grew up to be a police officer just like her dad, and at about 25 (she doesn’t know her true age), she is still a daddy’s girl, and a good cop.

One night she gets a call about a girl floating in the water, and when her partner tells her, they both know it’s important. The woman floating in the water is in the same area Luce was found in. And when they get there, they discover how much more Luce and the Jane Doe have in common.

Stranger than being found in the bayou, stranger than having no memory of her life, even stranger than anything in her life, Luce has copper bands all the way up her arms, under her skin. They can’t be removed without intense pain, and then they grow back. And her Jane Doe? Has them too.

This can’t be coincidence.

However, that same night they try to save this Jane Doe, something else is in the water with her. Something big. A team of hunters shows up, and they say they’ll help. But these hunters, they aren’t ordinary hunters, they’re a security team, and they’re trackers, hunters, bodyguards, whatever they need to be. And they magically show up exactly when Luce needs them? Also, not a coincidence.

I don’t want to spoil what’s going on, so I’m keeping this one vague, but Cole, one of the hunters, knows more about Luce than he’s letting on. And he can’t seem to stay away from her.

This book is so interesting, so different, and so exactly what I needed in my reading slump. Grab it. If you like excitement, mystery, magic, and romance, this is definitely the book for you. I’ve already grabbed the next in the series, and I can’t wait to dig in. 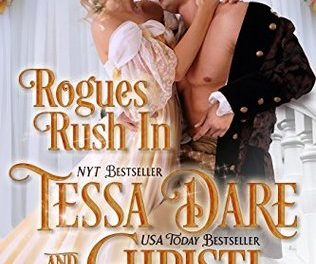