A SEAL in Wolf’s Clothing by Terry Spear 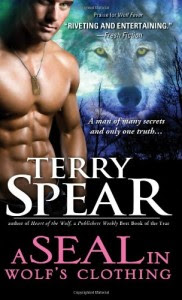 My first issue was how a bunch of werewolves could hide what they were while being Navy SEALs since they do change on the full moon. My second was that I don’t think it was really that hard to guess who the “bad” guy was, but then I’m a person who figured out Sixth Sense from the trailer. The third is that all the men are a little misogynistic but they are werewolves. And finally, like any pack is going to let it’s leader’s sister just take off with someone who isn’t pack I don’t care if he’s the Leader’s best friend or not. This definitely is a book meant for people who want a little supernatural with their romance, and not people who really love to immerse themselves in paranormal. That being said….

Finn is a member of the former SEAL group that was led by Hunter, who has recently gotten married and gone on his honeymoon. The team is retired but still take on undercover missions from time to time and recently one went very wrong nearly killing them all. So, when one of their team members is nearly assassinated Finn just knows it’s got something to do with that mission and that somehow Hunter’s sister Meara will be a target. He goes to Oregon to protect her only to find that Meara has decided she wants her own mate and has booked nothing but a bunch of alpha males at their resort for the next two weeks. Which, of course, drives Finn crazy because he’s completely attracted to her.

Of course there is the usual “You’re going with me to hide” “No I’m not.” “Yes you are.” “No I’m not.” “Yes you are.” gunfire “Ok I am.” but for the most part while Meara can be a bit obnoxious about wanting to help out, she mostly realizes she’d just be more of a hindrance and doesn’t whine too much or does anything that endangers everyone. That’s refreshing. And she doesn’t hold information back from people, which is again a nice change of pace since most women in novels like this won’t tell the good guys what the bad guys said to them…that’s so aggravating.

Finn is also a refreshing change. Yeah he’s typical arrogant alpha werewolf military male but he also will concede to Meara’s way of thinking at times and isn’t afraid to tell her what’s going on if he feels it is really essential to her survival.

The sexual tension between these two is pretty good. The car scene where Finn is checking Meara’s clothing for bugs is worth the read alone. I liked a lot of the side characters, especially Rourke the newly turned journalist. So if you like paranormal lite t’s definitely worth the read and I have to admit I have a couple of characters I’m anxious to see get together from this novel so I’ll definitely be keeping my eye out for new ones in this series.